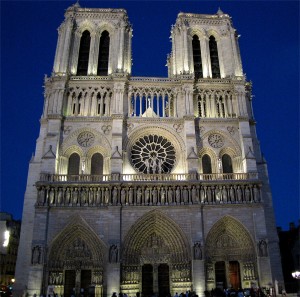 Notre Dame is a historic Catholic cathedral on the eastern half of the Île de la Cité. The Cathedral was built over two centuries (from 1163 to the mid XIVth century).The cathedral is widely considered to be one of the finest examples of French Gothic architecture, and it is among the largest and most well-known church buildings in the world. The naturalism of its sculptures and stained glass are in contrast with earlier Romanesque architecture. For a long time, the cathedral was amongst the highest constructions of Paris. It welcomes more than 20 million visitors per year, which makes it the most visited monument of Paris.