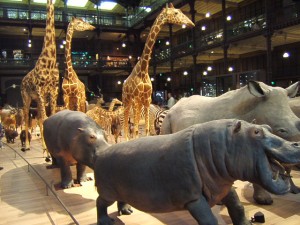 The French National Museum of Natural History, known in French as the Muséum national d’histoire naturelle (abbreviation MNHN), is the national natural history museum of France. The museum was formally founded on 10 June 1793, during the French Revolution. Its origins lie, however, in the Jardin royal des plantes médicinales (royal garden of medicinal plants) created by King Louis XIII in 1635, which was directed and run by the royal physicians. The royal proclamation of the boy-king Louis XV on 31st March 1718, however, removed the purely medical function, enabling the garden—which became known simply as the Jardin du Roi (King’s garden)—to focus on natural history. After receiving financial autonomy in 1907, it began a new phase of growth, opening facilities throughout France during the interwar years. In recent decades, it has directed its research and education efforts at the effects on the environment of human exploitation. In French public administration, the Muséum is classed as a grand établissement of higher education.