ITALY, AND THE CHINATOWN TOLBIAC 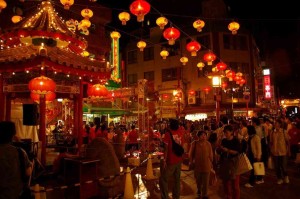 The Quartier Asiatique (Asian Quarter), also called Triangle de Choisy or Petite Asie, is the largest commercial and cultural center for the Asian community of Paris. It is located in the southeast of the 13th arrondissement in an area that contains many high-rise apartment buildings. The Quartier Asiatique forms an area roughly the shape of a triangle bounded by Avenue de Choisy, Avenue d’Ivry and Boulevard Masséna, as well as the Olympiades complex. Within this neighborhood, commercial activity is dominated by Chinese and Vietnamese businesses. The large French Asian specialty market chains of Tang Frères and Paristore also have their flagship locations within the quarter. The annual Lunar New Year parade within the neighborhood is largest in Paris.

The Place d’Italie, where the principal districts of the arrondissement (Quartier des Gobelins, the Asian quarter, Butte aux Cailles, etc.) converge, is the center of automobile traffic circulation and a crossroads for most of the metro and bus lines in this part of Paris. It is a major crossing-point for those leaving the city for the suburbs (and vice versa) and for those traveling between Montparnasse and the rive droite (right bank). One of the largest concentrations of Parisian business activity is in the general area of the Place d’Italie. Furthermore, it is a place for going out at night. The restaurants and cinemas of the Avenue des Gobelins attract many who are in search of diversion.